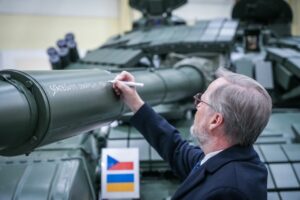 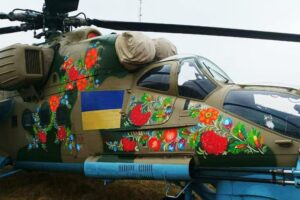 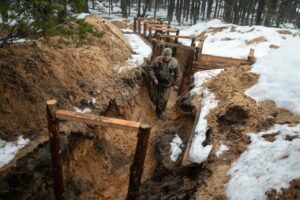 The Prime Minister of the Czech Republic, Peter Fiala, signs the tank, which he hands over to Ukraine. Photo: Twitter. Peter Fiala.

321st day of the full-scale war in Ukraine. The battle for Donbas continues. And although the occupiers have now concentrated their greatest efforts on Soledar, the result of this difficult and prolonged battle will be the liberation of our entire Donbas. It is extremely difficult: there are almost no whole walls left… Thanks to the resilience of our soldiers there, in Soledar, we won additional time and additional forces for Ukraine. Glory to all who work to ensure that Ukrainians win! Glory to all who fight for Ukraine! Each of us is a Warrior! Please stand with us! #StandWithUkraine

What is important to know about the situation in Ukraine as of January 10:

DNIPRO. The russians shelled the Nikopol district twice during the night. More than 30 deadly shells flew there. No one was injured, houses and cafes were damaged.

SUMY. The Head of the Sumy regional military administration, Dmytro Zhivytskyi, said that during the day, russian troops shelled the Sumy region 94 times.

DONBAS. The russian occupiers are concentrating their efforts on capturing the Donetsk region within the administrative border, but without success, the General Staff reported on Tuesday, January 10. Yesterday, russians wounded 6 civilians of Donetsk region: 4 in Bakhmut and 2 in Kurakhivka. russians hit Kramatorsk with missiles. The occupiers hit the roadway and a car with people in it. 2 people who were in the car died.

Photos of the 321st day of the war. Photo: Telegram / Zelenskiy