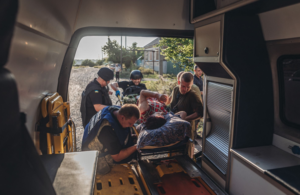 The 167th day of the full-scale war in Ukraine. Our words of infinite gratitude to all the Ukrainian defenders who are holding back the hostile offensive in the Donetsk and Luhansk regions at the cost of their own lives. As British intelligence has calculated, the occupiers have managed to advance no more than 10 km near Bakhmut and much less in other directions over the past month. We are grateful to the Ukrainian anti-aircraft forces for successfully destroying the russian missiles once again launched by the aggressor from the Black Sea on Ukrainian towns yesterday. Each downed missile means hundreds of lives saved. Our Ukrainian heroes are breaking the russian terrorist machine on the battlefield. By protecting our state, we also protect all those who have already been threatened or are just planning to be threatened by a terrorist state. Acting together, let’s make our world safe and free from the aggression of bloody dictators!

Every one of us is a Warrior! Please stand with us! #StandWithUkraine Consequences of the fall of a russian cruise missile in the Cherkasy region. Photo by State Emergency Service

What’s important to know about the situation in Ukraine as of August 9:

DONETSK REGION. Fierce fighting continues near Slovyansk, Bakhmut and Avdiivka. According to British intelligence, russia has failed to establish combat-ready infantry in sufficient numbers to ensure a significant advance in the region. The national police reported 28 strikes on 16 settlements over the past 24 hours. As a result of the fighting in the area, 47 civilian objects, including 34 residential buildings, were destroyed and damaged. Three civilians were killed, and 19 others were wounded. KHARKIV. On August 8, the russian military fired cluster shells at the Pavlove Pole area in Kharkiv. As a result of the enemy shelling, one person was killed, and another was wounded. The thermal power plant, which supplies heat and hot water to almost a third of the city, was damaged. At least four explosions were heard in Kharkiv on the night of August 9. According to local authorities, a power line and tram rails were harmed in the city’s Industrialnyi district. Shrapnel from another shell damaged the facade of a two-storey building, which has nothing to do with military infrastructure.

DNIPRO. Local authorities reported new shelling in the Nikopol and Sinelnikovsky districts. The occupiers fired 120 shells at Nikopol. A 46-year-old man has been hospitalised.

SUMY. On August 8, russian troops shelled the village of Katerynivka in the Shostka district. According to the Office of the Prosecutor General, a local woman riding her bicycle through the town died of a shrapnel wound in the neck. A Ukrainian military  cooks food at a position near Kharkiv. Nacho Doce / Reuters